What they are saying about Black Jade Dragon

"The pacing is excellent, with non-stop action. There are many plot twists as well, which kept me guessing. Angie denies that she wants to help, but her actions belie her words. There is also a nice overlay of Buddhist sayings which really fit the various situations. The world on Shaolong Island seems very real and I felt as if I, too, were being chased by dragons."
Read more at http://www.longandshortreviews.com/book-reviews/black-jade-dragon-by-susan-brassfield-cogan/

"Cogan has managed to write a great novel about dragons, magic pearls, invisible swords, and a down-on-her-luck thief who beats the odds. This is a really fantastic book and well worth your money." 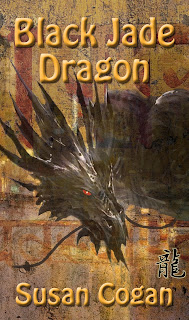 #1 in the Black Jade Dragon Series
Do not meddle in the affairs of dragons for you are crunchy and good with ketchup...(source unknown)

In the South China Sea is an island protected by nine dragons. Angie Tanaka has made one of them really, really angry.

Angie is running from the Hong Kong police and pays the captain of a fishing boat to take her … anywhere but here. Her only possessions are her grandfather’s sword and a fistful of stolen diamonds. When she lands on Shaolong Island she thinks she’s made good her escape with her ill-gotten gains. She thinks she’s safe. She’s heard about Shaolong’s dragons but she thinks they are a myth. She doesn’t know they can take human form. She doesn’t know that on Shaolong anyone you talk to might be a dragon.

When Angie sees a mystical pearl the size of her head she finds it irresistible. True to her nature, she must steal it. And true to her usual bad luck, in the middle of the heist a kindly old woman is murdered. Angie is not a killer, but the murder was done with her sword, she was there, and she was stealing something. All eyes turn to Angie, especially those of the dead woman’s husband who looked like such a nice old man … until he turned into the Silver Dragon.

Now Angie is running for her life and the only thing standing between Angie and a monster that could eat a Toyota Tundra in two bites is Daiyu, the Black Jade Dragon.

I have been writing for a long time. This is my seventh novel. I wrote it for fun and I completely enjoyed writing this story. It wasn't written to impress an editor, a publisher or an agent. It is not aimed at a demographic or a target market. No focus groups have seen it. I do not recommend Angie as a role model. She jumps from frying pan to fire, back up to the pan and right back down into the fire. 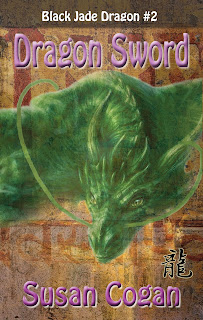 #2 in the Black Jade Dragon Series

Here we go again! Angie Tanaka can't seem to stay out of trouble. She finds herself haunted by a cute little hungry ghost and a not-so-cute demon who has a special hell kept warm just for dragons.

And this is how it all starts:

I needed to steal something.

I don't mean I really wanted something in particular. I mean I wanted to steal something.

So to scratch that itch I was climbing up the side of the Twelve Treasure Museum to a hidden floor not open to the public. It was supposed to be haunted. That was perfect. Perfect for me anyway.

I'm Angie Tanaka, the one-woman crime wave. That's what it says on my business cards. I stumbled across this museum one day when I was bored and feeling too much like an upright citizen....

I pulled myself up onto the roof—the first level of the house, anyway. It was an old-fashioned Chinese pagoda built like a wedding cake. The outside was covered with the Asian version of gingerbread. The carvings and embellishments had a dragon theme, but a lot of things are decorated with dragons on Shaolong, the Land of Nine Dragons. Real ones. I'm being honest here. I bullshit a lot—I was kidding about the business cards—but not about this.

Available at Amazon, Smashwords, and Barnes & Noble (and all the other usual places)
Need a Paper Version? 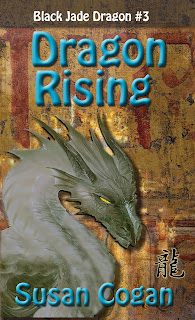 #3 in the Black Jade Dragon Series

It’s such a delicious phrase. Angie Tanaka never thought she’d want to go there herself.

Usually people spend their entire lives avoiding a trip to Hell. Not Angie. Long-ju is down there and it was all her fault. He is the Silver Dragon, magnificent, legendary, a work of art. He had sacrificed himself for her and she is only … Angie. She needed to put that right. She had to get him out of there. Nobody was going to help her with that, certainly not the other dragons.

All of that led to one question: How do you spring a dragon out of Hell?

Cover Design that Won't Cost You a Fortune